With RedSeal, NERC Registered Entities can significantly reduce the cost associated with enforcing NERC CIP compliance by automating assessment of many of the NERC CIP controls. Certain controls have traditionally been very difficult to automate, and therefore resource intensive to maintain and audit. However, RedSeal’s unique technology can automate and prioritize these troublesome NERC CIP controls, greatly decreasing resource requirements while actually improving the quality of the control. For example:

For detail on how RedSeal can support your NERC-CIP compliance efforts, download our NERC CIP Version 6 datasheet. 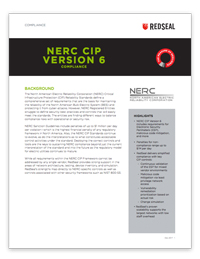 A leading US integrated power company is required to meet the government standards set forth by NERC (North American Electric Reliability Corporation). The NERC CIP (Critical Infrastructure Protection) plan is a set of requirements designed to secure the assets required for operating North America’s bulk electric system. The plan consists of 9 standards and 129 requirements covering the security of electronic perimeters and the protection of critical cyber assets as well as personnel and training, security management and disaster recovery planning.

“Using RedSeal reduced the time it takes us to evaluate our systems for specific vulnerabilities from one person/month to 15 minutes.

We can spend our time on mitigation, rather than assessment.” 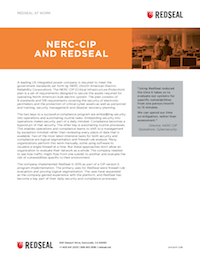