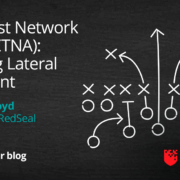 In football, scoring a touchdown means moving the ball down the field. In most cases, forward motion starts the drive to the other team’s end zone. For example, the quarterback might throw to a receiver or handoff to a running back. Network attacks often follow a similar pattern: Malicious actors go straight for their intended target by evaluating the digital field of play and picking the route most likely to succeed.

In both cases, however, there’s another option: Lateral movement. Instead of heading directly for the goal, attackers move laterally to throw defenders off guard. In football, any player with the ball can pass parallel or back down the field to another player. In lateral cyberattacks, malicious actors gain access to systems on the periphery of business networks and then move “sideways” across software and services until they reach their target.

Zero trust network access is rooted in the notion of “need to know” — a concept that has been around for decades. The idea is simple: Access and information are only provided to those who need it to complete specific tasks or perform specific actions.

The term “zero trust” refers to the fact that trust is earned by users rather than given. For example, instead of allowing a user access because they provide the correct username and password, they’re subject to additional checks which verify their identity and earn the trust of access. The checks might include two-factor authentication, the type of device used for access, or the user’s location. Even once identity has been confirmed, further checks are conducted to ensure users have permission to access the resource or service they’re requesting.

As a result, the term “zero trust” is somewhat misleading. While catchy, it’s functionally a combination of two concepts: Least privilege and segmentation. Least privilege sees users given the minimum privilege necessary to complete assigned tasks, while segmentation focuses on creating multiple digital “compartments” within their network. That way, even if attackers gain lateral access, only a small section of the network is compromised.

Adoption of ZTNA is on the rise, with 96 percent of security decision-makers surveyed saying that zero trust is critical for organizational success. Recent predictions also suggest that by 2023 60 percent of enterprises will phase out their remote access virtual private networks (VPNs) and replace them with ZTNA frameworks.

The Fundamentals of ZTNA-Based Architecture

While the specifics of a ZTNA deployment will look different for every business, there are five fundamental functions of zero-trust network access:

1. Micro-segmentation: By defining networks into multiple zones, companies can create fine-grained and flexible security policies for each. While segments can still “talk” to each other across the network, access requirements vary based on the type of services or data they contain. This approach reduces the ability of attackers to move laterally — even if they gain network access, they’re effectively trapped in their current segment.

2. Mandatory encryption: By encrypting all communications and network traffic, it’s possible to reduce the potential for malicious interference. Since they can’t see what’s going on inside business networks simply by eavesdropping, the scope and scale of their attacks are naturally limited.

3. The principle of least privilege: By ensuring that all users have only the minimum privilege required to do their job, evaluating users’ current permission level every time they attempt to access a system, application, or device, and removing unneeded permissions when tasks are complete, companies can ensure that a compromised user or system will not lead to complete network access.

When it comes to network security and lateral compromise, businesses and attackers are playing by the same rules, but in many cases, malicious actors are playing in a different league. To follow our football analogy, it’s as if security teams are playing at a high-school level while attackers are in the NFL. While the plays and the objectives are the same, one team has a distinct advantage in terms of size, speed, and skill.

ZTNA can help level the playing field — if it’s correctly implemented. Here are three best practices to make it work:

Knowing what to segment and where to create segmentation boundaries requires a complete inventory of all desktops, laptops, mobile devices, servers, ports, and protocols on your network. Since this inventory is constantly changing as companies add new cloud-based services, collecting key data is no easy task. Manual processes could take six months or more, leaving IT teams with out-of-date inventories.

Many businesses now prioritize the collection of “real-time” data. The problem? Seeing security event data in real-time means that incidents have already happened. By capturing complete network visibility, companies can prioritize proactive responses that limit overall risk rather than requiring remediation after the fact.

Security isn’t static. Network configurations change and evolve, meaning that ZTNA must evolve in turn. Bolstered by dynamic visibility from RedSeal, businesses can see where lateral compromise poses risk, where segmentation is working to prevent access, and where changes are necessary to improve network security.

Security is a zero-sum game: If attackers win, companies lose. But the reverse is also true. If businesses can prevent malicious actors from gaining lateral access to key software or systems, they come out ahead. The challenge? One-off wins aren’t enough; businesses need consistent control over network access to reduce their total risk.

Download our Zero Trust Guide today to get started.