The drumbeat of media coverage of new breaches continues, but it’s useful sometimes to look back at where we’ve been.  Each scary report of so many millions of records lost can be overwhelming.  It certainly shows that our network defenses are weak, and that attackers are very effective.  This is why digital resilience is key – perfect protection is not possible.  But each breach takes a long time to triage, to investigate, and ultimately to clean up; a lot of this work happens outside the media spotlight, but adds a lot to our sense of what breaches really cost.

Today’s news includes a settlement figure from the Anthem breach from back in 2015 – a final figure of $115 million.  But is that a lot or a little?  If you had to pay it yourself, it’s a lot, but if you’re the CFO of Anthem, now how does that look?  It’s hard to take in figures like these.  So one useful way to look at it is how much that represents per person affected.

Anthem lost 79 million records, and the settlement total is $115 million.  This means the legally required payout comes out just a little over a dollar per person – $1.46 to be exact.

That may not sound like a lot.  If someone stole your data, would you estimate your loss to be a bit less than a plain black coffee at Starbucks?

Of course, this figure is only addressing one part of the costs that Anthem faced – it doesn’t include their investigation costs, reputation damage, or anything along those lines.  It only represents the considered opinion of the court on a reasonable settlement of something over 100 separate lawsuits.

We can also look at this over time, or over major news-worthy breaches.  Interestingly, it turns out that the value of your data is going up, and may soon exceed the price of a cup of joe.  Home Depot lost 52 million records, and paid over $27 million, at a rate of 52 cents per person.  Before that, Target suffered a major breach, and paid out $41 million (over multiple judgements) to around 110 million people, or about 37 cents each.  In a graph, that looks like this: 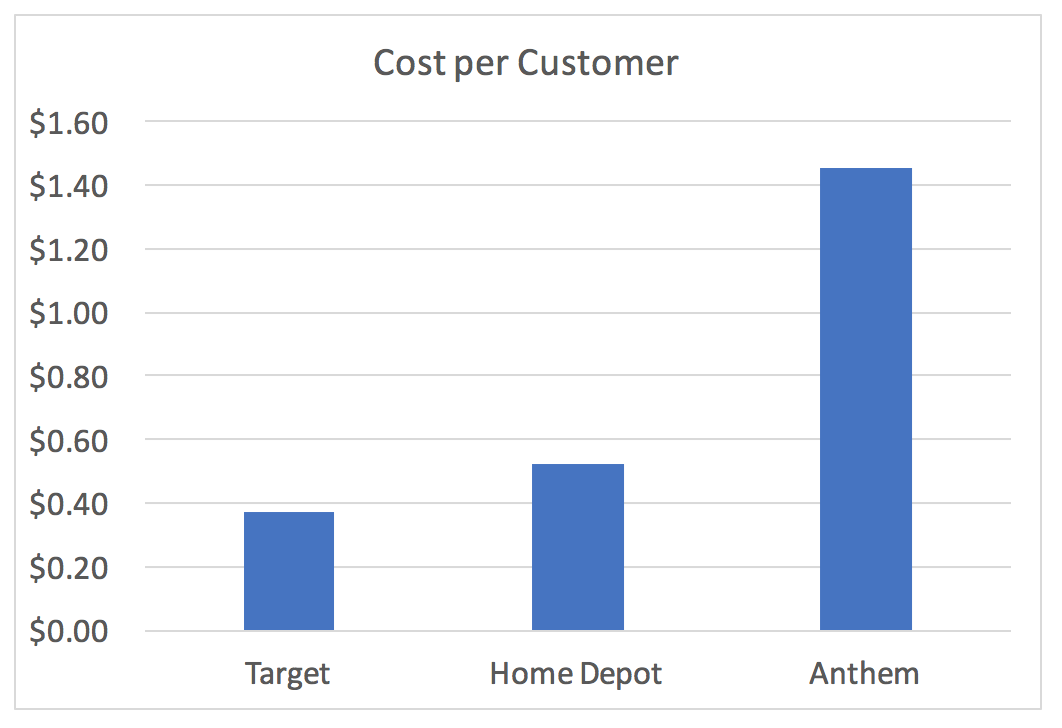 Note the escalating price per affected customer. This is pretty startling, as a message to the CFO.  Take your number of customers, multiply by $1.50, and see how that looks.  Reasonably, we can expect the $1.50 to go up.  Imagine having to buy a Grande Latte for every one of your customers, or patients that you keep records on, or marketing contacts that you track.  The price tag goes up fast!