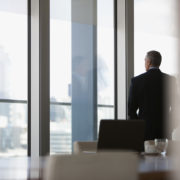 SUNNYVALE, Calif.  – RedSeal (www.redseal.net), a leader in the cybersecurity analytics market, today released the results of a CEO study, which surveyed perceptions of – and confidence in –  their cybersecurity posture.

The study found that more than 80 percent of CEOs are very confident in their firm’s cybersecurity strategies, despite the fact that security incidents have surged 66 percent year-over-year since 2009 according to PricewaterhouseCoopers’ 2017 Global State of Information Security Survey.

“CEOs are underestimating their companies’ cyber vulnerabilities,” said Ray Rothrock, chairman and CEO of RedSeal. “Their confidence does not square with what we observe. Cyber-attacks are up and financial losses associated with these attacks are increasing dramatically.” Specifically, PricewaterhouseCoopers’ 2015 Global State of Information Security Survey projected that financial losses from cyber-attacks will jump from $500 billion in 2014 to more than $2 trillion in 2018.

Cyber Confidence Based on Out-of-Date Strategies

While CEOs remain confident that their cyber strategies are well equipped to handle the risks facing their company networks, there is a disconnect between their perception and reality. In Oct. 2014, FBI director James B. Comey said that no company is immune from attack. “There are two kinds of big companies in the United States,” he told 60 Minutes. “There are those who’ve been hacked…and those who don’t know they’ve been hacked.”

Yet two years later, the RedSeal study found that half of the CEOs still prioritize keeping hackers out of the network, versus just 24 percent who were concerned with building capabilities to deal with hackers who have successfully breached their network’s perimeter defenses.

“The new cyber battleground is inside the network, not at the perimeter,” said Rothrock. “Firewalls, virus detectors, and malware scans are required to keep out 99 percent of the bad guys, but the one percent who get in can cripple a firm, critical infrastructure or a government agency.”

CEOs Struggle to Assess Their Massive – and Growing – Cybersecurity Investments

The study found that, while 87 percent of CEOs agree that they need a better way to measure the effectiveness of their cybersecurity investments, 84 percent still plan to increase their spending in the next year. A trend reiterated by IDC’s Oct. 2016 prediction that organizations will spend $101.6 billion on cybersecurity software, services, and hardware in 2020, a 38 percent increase from its 2016 spend projections.

“We’ve reached an inflection point where cyber security strategies and investments have underperformed for an extended period of time. Analysts estimate that cyber losses are now growing more than twice as fast as the spend on security,” continued Rothrock. “To stem this tide, CEOs and boards need more effective metrics to understand the real-time health and function of their network, and to more clearly manage and measure their cyber strategies and investments.”

Even though security budgets are at an unprecedented high, nearly three out of four CEOs report the metrics they receive lack meaning or context. Most (79 percent) agree their reports are too difficult to understand, and 87 percent need a better way to measure whether cybersecurity investments are effective. In addition, they cite a lack of timeliness (51 percent) as well as only receiving reports in times of crisis (50 percent) as significant challenges.

Nearly 90 percent of CEOs say they want information – on a daily basis – about their cybersecurity posture and network’s overall health, external threat level, and the resilience of the network.

And while 79 percent of CEOs surveyed strongly agree that cybersecurity is a strategic function that starts with executive leadership versus being a responsibility passed on to the IT team, 89 percent of these same CEOs report reliance on their IT team to make the budget decisions on cybersecurity.

“CEOs project a great level of confidence when asked about their cybersecurity strategies, however their perceptions aren’t in line with reality,” said James Kaplan, partner at McKinsey & Company and co-author of Beyond Cybersecurity: Protecting Your Digital Business. “For years, the IT security industry has operated with the understanding that every organization will suffer a security incident. Given this inevitability, CEOs should be much more focused on building resilience into their businesses so they can maintain operations when the breach occurs.”

This RedSeal study was conducted online via independent data collection firm, 72 Point, in September 2016. 200 chief executive officers in the U.S. were randomly sampled, at organizations with 250 or more employees. 42% of respondents were CEOs of companies with greater than 1,000 employees. The survey reached CEOs across a host of major industries, including technology, finance, manufacturing, government and retail. Respondents were invited to the survey from an invitation-only panel of CEOs. The survey and methodology is MRS compliant. To review an executive summary of the results, visit our website.

RedSeal puts power in decision makers’ hands with the essential cybersecurity analytics platform for building digitally resilient organizations. RedSeal’s Digital Resilience Score, modeled after a creditworthiness score, measures how prepared an organization is to respond to an incident and quickly rebound. The company’s platform adds value to existing network devices by working with them and building a network model. With this, customers can understand the state of their networks, measure resilience, verify compliance, and accelerate incident response. RedSeal’s customers are Global 2000 corporations and government agencies that depend on the most sophisticated security. Founded in 2004, RedSeal is headquartered in Sunnyvale, Calif. and serves customers globally through a direct sales and channel partner network.