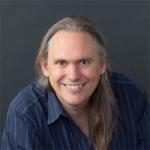 I am interested in big, complex problems that are difficult to solve like cybersecurity and network resilience. Both are complex problems because people are good at building big systems and not so great at understanding those systems.

Take the financial meltdown. We built up financial markets piece by piece. Most people understood parts of the system, but few understood what was going on at a system level.

So my professional focus is to get computers to “think” about complex networks and security because people generally do not deal well with such complexity.

I’ve been working on this —getting computers to think about complex problems—for more than 30 years.  I often joke when being introduced to people, “I lack the imagination to move on to a new problem.”

As I said, cybersecurity is a particularly complex and compelling problem, with implications for national and global security. We must build cybersecurity and develop digital resilience. There really is an imperative to do this well.

Network systems are made from large groups of simple elements, which take on new behaviors when they become part of a larger complex system.

Flocks of birds, schools of fish and ant colonies are all examples of complicated systems based on the interaction of simple creatures. Many things in life, including networks, are like that.

Let’s start with the idea that “element thinking” and “system thinking” are different things—and RedSeal is a system-thinking solution.

Some people look at single elements in the network, to make sure they’re working correctly. That’s important, but you cannot solve security problems by just thinking about elements—you need to see the entire system. RedSeal looks at the network as a system. We help organizations look at the entire network—both physical and the cloud.

Why do I have a pilot’s license? Because it was hard. That’s not the whole reason, but part of what is interesting about being a pilot is that it is quite difficult. It takes all your focus when you’re doing it. Just like big complex problems, you must immerse yourself in it to succeed.

Dr. Mike Lloyd has more than 25 years of experience in the modeling and control of fast-moving, complex systems. He has been granted 21 patents on security, network assessment, and dynamic network control. Before joining RedSeal, Mike Lloyd was Chief Technology Officer at RouteScience Technologies (acquired by Avaya), where he pioneered self-optimizing networks. Mike served as principal architect at Cisco on the technology used to overlay MPLS VPN services across service provider backbones. He joined Cisco through the acquisition of Netsys Technologies, where he was the senior network modeling engineer.

“We are engaged in a kind of economic warfare with cyber criminals.…so long as you have any kind of online presence, or any digital records about your customers, then you are a target." - RedSeal CTO @dr_mike_lloyd to @ishers123 in #InformationAge https://t.co/Uz7BHqRmti.

Dr. Mike Lloyd explains the advantages of centralizing your cybersecurity information into one “war room.” (1:53)

Making All This Technology Work for You

Dr. Mike Lloyd delivers a panel presentation on Innovation and Integration at the Technology Expo 2017. (51:50)