SAN JOSE, Calif.— RedSeal (www.redseal.net), whose award-winning cyber terrain analytics platform helps companies measurably reduce their cyber risk, announced today its selection by TAG Cyber as a Distinguished Vendor in the 2021 Security Annual. The Security Annual is designed to help enterprise teams identify security gaps and determine what solutions should be part of their security portfolio.

Each distinguished vendor was selected by the TAG Cyber Analyst team, led by Dr. Edward Amoroso, CEO of TAG Cyber.

“We’re happy to support the work of Ed and his team at TAG,” said Bryan Barney, CEO of RedSeal. “They provide world class analysis and truly understand what our platform brings to enterprise customers around the world.”

The 2021 Security Annual is part of a series from TAG Cyber that has been published each September since 2016. The report offers expert guidance, analysis, and education across the entire cybersecurity ecosystem.

In the face of rigorous new demands, RedSeal gives security and management teams the most holistic understanding of their organization’s cyber risks – across physical, cloud and virtual networks – including remote endpoints.

“I’m very thankful to the RedSeal team for supporting our work this year,” said Amoroso. “Their work in hybrid environment security brings great value to the industry.”

The 2021 Security Annual is available for free download here.

Earlier in 2020, Computer Weekly and TechTarget published the results of our annual IT Priorities study, a wide-ranging look at what is currently top of mind for IT buyers. Amid overall softening budgets across the IT landscape, the survey reported that security and risk management were easily top of the heap, with cyber security coming to be seen as more important than cost.

For Redseal CTO Mike Lloyd, who besides 21 patents in cyber security holds a PhD in stochastic epidemic modelling, the future of security after Covid-19 looks uncertain, but then, he adds, isn’t the future always uncertain?

Dr. Mike Lloyd, CTO at RedSeal, on how to protect your supply chain from cyberattacks.

“The supply chain combatted the challenge of repeatable quality through standards and audits – organisations establish baselines of what it takes to make a reliable product, and then build the supply chain around those who can meet the standard. The time has come for comparable efforts around cybersecurity and digital resilience across the supply chain.”

Cybersecurity is one of the most urgent world issues, meaning February 2020 is no time for indifference. A new year invariably brings new threats as the news cycle is dominated by high-profile hacks and disastrous cases of negligence.

San Jose’s RedSeal saw the light of day in 2004 and has spent the intervening years helping companies improve their cyber risk assessments and their scoring and modeling methodologies.

Performing regular vulnerability assessments is critical in modern cybersecurity and the key to staying ahead of emerging threats. That goes double for health care companies (one of RedSeal’s specialties), who are beholden to HIPAA and various other ongoing threat assessment requirements.

Wow. What an amazing read. I was mesmerized by the details and easily way you explained the Target breach all the way through the list of recommendations.  Really great work.

Fascinating, compelling, a beautifully-written page turner that draws the reader in immediately. I learned a whole new vocabulary—new words to convey new concepts in paragraph after paragraph—introduced elegantly and seamlessly so as not to disrupt the flow of the intriguing story you were unfolding. Concepts like “preemptive mitigation of damage” to augment existing security measures aimed at preventing breaches, which are inevitable. And that because of the “frictionless vulnerability” that accompanies the much-desired ability to communicate without friction. The difference (in time and consequence) between infiltration of the network and “exfiltration” of the data. On and on like this.

A whole fascinating world that reads more like a John Grisham novel than a technical treatise. That’s my comment on the pleasure of reading it; masterfully crafted prose and structure. Beyond that, you make an iron-clad case that (1) cybersecurity is among the most important issues of our time and (2) the digital resilience you describe is indispensable and also possible if senior leadership will educate themselves, institute the changes you advocate, and pay attention. I loved your dark energy-dark matter analogy at the opening of Chapter 7.

By Azure Yu, Titans Briefs, The University of Texas at Austin McCombs School of Business

Cyberattacks are inevitable and costly in today’s intensively connected world. Undergoing cyberattacks will be the norm rather than the exception for all kinds of organizations, and these attacks will usually have devastating consequences. To survive in this hostile environment, companies have implemented necessary security measures such as firewalls and anti-malware, but these measures are insufficient against the inherent risks of digital networks. Greater connectivity comes with more vulnerability. Rothrock points out that C-suites must use “digital resilience” as a whole-business strategy. Digital resilience allows companies to survive attacks, contain breaches, recover, and continue to operate while under attack. Lack of digital resilience can lead to severe consequences – the 2013 Target breach was an example.

The book describes digital resilience in detail. It covers the history of networks, the technical fundamentals, and the distributed nature of the current state. It paints a vivid picture of the inevitability of a successful attack, given that over a trillion Internet of Things (IoT) devices are connected to the network and each node creates vulnerability. It provides actions business leaders can take toward achieving digital resilience. Here are the eight steps listed in the book to build deep knowledge of your data and networks:

Ray Rothrock, the general manager at the Rockefeller family’s venture capital firm, Venrock, moves fast. When opportunity presents itself–and sometimes even when it does not–he plunges forward, certain that action will create its own luck.

Entrepreneurs are everywhere today—from Silicon Valley to incubators and tech hubs around the world. While many startups are in tech, others involve engineers who use digital tools and 3-D printing to invent new products or reinvent existing ones. So, what should potential entrepreneurs consider before leaping? I don’t have a definitive answer, but after 25 years of funding startups, more than 40 successful investments, and eight initial public offerings, I see some patterns that work.

Sunnyvale, Calif. – November 3, 2017 – RedSeal, the leader in network modeling and cyber risk scoring, today released the results of its second annual Resilience Report, which found IT Security teams are on the verge of a huge crisis.

The 2017 Resilience Report asked 600 U.S. and UK CISOs and senior IT decision makers about the biggest challenges they face. Across the board, the majority report four areas central to cybersecurity are all at risk –  resources, preparation, detection and overarching strategy – exposing their organizations to significant cyber threats. 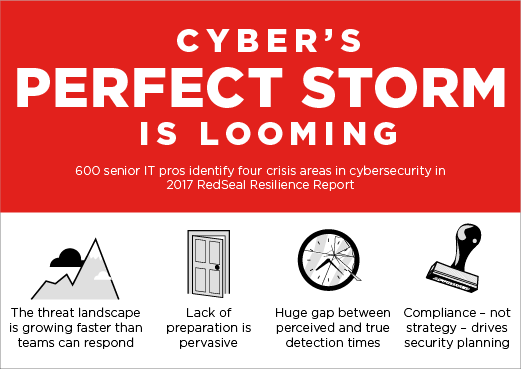 1. A sophisticated threat landscape, evolving faster than teams can respond

The burgeoning threat volume and complexity is outpacing security teams’ capabilities. More than half (54 percent) of senior cybersecurity professionals think the threat landscape is evolving far faster than their organization can respond. Specifically:

2. Lack of preparation is pervasive

The 2017 RedSeal Resilience Report found that only 25 percent of respondents’ organizations test their cybersecurity response to a major incident annually, if at all.  It also found a strong correlation: as time since the last test increases, executives’ confidence in the plan decreases.

3. There’s a dangerous gap between perceived and true detection times

This infers that – despite detection being considered the security teams’ greatest strength – companies are struggling and not fully informed. Take for example, Sonic, which didn’t know they were hacked until their credit card processor informed them of unusual activity. They acknowledged the breach – which compromised more than five million credit cards – 11 days after the first batch of cards were uploaded for sale.

Given the massive financial impact of breaches, cyber strategy should be the C-Suite’s priority. However, 97 percent of respondents report that external regulations play a major role in their cybersecurity and resilience planning and implementation.

“Having any one of these four areas – resources, preparation, detection and overarching strategy –  in crisis is dangerous. Combined, they’re the harbinger of security disaster for any organization,” noted Ray Rothrock, CEO and chairman of RedSeal. “This report underscores the urgency for the leaders of cyber strategy to pivot and aggressively pursue resilience, the ability to maintain business as usual while navigating an attack, as the new gold standard.  Being prepared is the best defense.”

The RedSeal Resilience Report 2017, an inside view into the state of the IT security industry, provides insights into strategies and challenges across the complex cybersecurity landscape.

Each of the 600 CISOs, CIOs and senior IT decision makers (400 U.S. and 200 UK) who participated had sole or majority responsibility for network cybersecurity within their organizations, 25 percent of which have more than 5,000 employees. They bring perspective from across a number of industry sectors including: retail and distribution; healthcare; technology; financial services; energy – oil and gas; manufacturing and production. Global market research firm, Vanson Bourne, conducted the research in the summer of 2017.

The 2016 RedSeal Resilience Report explored the, “Rise of Cyber-Overconfidence in the C-Suite,” and found more than 80 percent of CEOs display “cyber naiveté,” making their global organizations exposed to massive cyber-attacks.