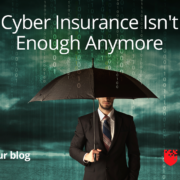 Premiums have risen significantly, and insurers are placing more limits on covered items. Industries like healthcare, retail, and government, where exposure is high, have been hit hard. Many organizations have seen huge rate increases for substantially less coverage than in the past. Others have seen their policies canceled or been unable to renew.

In many cases, insurers are offering half the coverage amounts at a higher cost. For example, some insurers that had previously issued $5 million liability policies have now reduced amounts to $1 million to $3 million while raising rates. Even with reduced coverage, some policy rates have risen by as much as 300%.

At the same time, insurers are leaving the field. Big payoffs in small risk pools can devastate profitability for insurers. Many insurers are reaching the break-even point where a single covered loss can wipe out years of profits. In fact, several major insurance companies have stopped issuing new cybersecurity insurance policies altogether.

This is in part to incidents like the recent Merck legal victory forcing a $1.4B payout due to the NotPetya’s malware attack. According to Fitch Ratings, more than 8,100 cyber insurance claims were paid out in 2021, the third straight year that claims increased by at least 100%. Payments from claims jumped 200% annually in 2019, 2020, and 2021 as well.

Claims are also being denied at higher rates. With such large amounts at stake, insurers are looking more closely at an organization’s policies and requiring proof that the organization is taking the right steps to protect itself. Companies need to be thinking about better ways to manage more of the cyber risks themselves. Cyber insurance isn’t enough anymore.

At the heart of all of this drama is ransomware. The State of Ransomware 2022 report from Sophos includes some sobering statistics.

More companies are paying the ransom as well. Nearly half (46%) of companies hit by ransomware chose to pay despite FBI warnings not to do so. The FBI says paying ransoms encourages threat actors to target even more victims.

Even with cyber insurance, it can take months to fully recover from a ransomware attack and cause significant damage to a company’s reputation. Eighty-six percent (86%) of companies in the Sophos study said they lost business and revenue because of an attack. While 98% of cyber insurance claims were paid out, only four out of ten companies saw all of their costs paid.

Ransomware attackers are now often requiring two payments. The first is for providing the decryption key to unlock encrypted data. A demand for a separate payment is made to avoid releasing the data itself publicly. Threat actors are also hitting the same organizations more than once. When they know they’ll get paid, they often increase efforts to attack a company a second or third time until they lock down their security.

Protecting Yourself from Ransomware Attacks

Organizations must deploy strict guidelines and protocols for security and follow them to protect themselves. Even one small slip-up in following procedures can result in millions or even billions of dollars in losses and denied claims.

The root cause of most breaches and ransomware attacks is a breakdown in processes, allowing an attack vector to be exploited. This breakdown often occurs because there is a lack of controls or adherence to these controls by the people using the network.

Whether organizations decide to pay the price for cyber insurance or not, they need to take proactive steps to ensure they have the right policies in place, have robust processes for managing control, and train their team members on how to protect organizational assets.

Organizations also need a skilled cybersecurity workforce to deploy and maintain protection along with the right tech tools.

Even with all of this in place, strong cybersecurity demands continuous monitoring and testing. Networks are rarely stable. New devices and endpoints are added constantly. New software, cloud services, and third-party solutions are deployed. With such fluidity, it’s important to continually identify potential security gaps and take proactive measures to harden your systems.

One of the first steps is understanding your entire network environment and potential vulnerabilities. For example, RedSeal’s cloud cybersecurity solution can create a real-time visualization of your network and continuously monitor your production environment and traffic. This provides a clear understanding of how data flows through your network to create a cyber risk model.

Users get a Digital Resilience Score which can be used to demonstrate their network’s security posture to cyber insurance providers.

This also helps organizations identify risk factors and compromised devices. Also, RedSeal provides a way to trace access throughout an entire network showing where an attacker can go once inside a network. This helps identify places where better segmentation is required to prevent unauthorized lateral movement.

Cyber Insurance Is Not Enough to Protect Your Bottom Line

With escalating activity and larger demands, cyber insurance is only likely to get more expensive and harder to get. Companies will also have to offer more proof about their security practices to be successful in filing claims or risk having claims denied.

For more information about how we can help you protect your network and mitigate the risks of successful cyber-attacks, contact RedSeal today.

CNAPP: The Future of Cloud Security